EVERY 4ACCS MILE a MEMORY

THANKS FOR THE MEMORIES!!!!!……
It was in spring of 1973, that EC-135A Tail 61-0262 assigned to the 28th Bomb Wing’s 4th Airborne Command Control Squadron was on a return flight from Minot AFB, North Dakota to Ellsworth AFB, South Dakota after being deployed for ALCC alert.  After landing on the wet runway the aircraft hydroplaned and left the end of the runway.  Story is the only injuries were bruised ego’s and one crew a crew member who egressed via the hatch with no gloves on and sustained rope burns to his hands.  It was reported no damage to the aircraft.

“Flew on “too sick to fly” many times.  The frame was actually bent and it flew 2 degrees off.  That’s what I always heard.” – Thomas Phelps

“What caused the bent airframe?  Was it this incident?” – Neil Foley

“That was what I always heard.” – Thomas Phelps

“Never heard any aircrew comment about the airframe being bent/crooked.” _Billy Meeks

“If I recall from briefs regarding this incident, Dickie Sirk was on this change over and may have been the first one out of the aft hatch…at least that is what he told us as to why he was sooo short.” – Anthony Androsky

“Captain Andy Knight, MCCC-A was the one with the rope burns.” – Joe Bruch

“That might explain why that jet always felt crooked.” – Mike Weimer

“We ran off the runway at Offutt once while I was there with 2ACCS.  Hit the hatch and headed up wind.  We never even noticed how low the hatch was to the ground until we walked back to the jet.” – Mike Dominick

“My “Books of Facts” have become tattered and worn over the decades, but this may have been my notes from my first 262 flight.” – Anthony Androsky

“It may have been a Southern Tier, but since I only noted ratios for FEW, maybe it was a non-off or retest.” – Anthony Androsky

“0262 was struck by lightning while on the ramp at Minot just after coming off alert in 1989.  The strike blew the boom floodlight off the tail of the aircraft.” – Mike Smith

“Mark Gillett how did you know get the call sign “Lightning” after that?” – Tom Timmons

“They never put another floodlight on her.  Lightning LeRoy caught some of that jolt.” – Karl Kellerman

“Carl Bray and I got struck on what I think was 262 somewhere over the Dakotas.  St Elmos fire was dancing on the glare shield and it hit just below my window.  Something about that jet (or maybe me).” – Rich Hartlaub

“Am I mistaken?  Didn’t some of the crew who were on the ground outside the ac, get zapped?” – Jim Oliver

“Yes the crew chief was on the ground under the jet and got zapped.” – Mike Smith

“Russ Truitt had his hand on the tire and he felt it go up his arm and back down…the boom wasn’t touching anything but was blown in the air and his hair stood up…crew chief holding strut was blown in the air and hit the ground unconscious…when he came too he started screaming that his foot was on fire…he pulled his boot off and threw it…we put all of them in a mx truck and took them to the hospital…boom had to stay cuz blood work showed the indications of a massive heart attack…Doctor pulled me to the side and said he didn’t know why he was alive.” – Mark Gillett

“Yeah I was the boom.  Al Williams was the co-pilot.  Scary stuff.  Jim had his hand on the tail support strut.  We just got done fueling up.  Fuel pit cap was still off.” – Daniel Lightning Rogan

“Dan you and I were coming off alert, wasn’t Ed Berte on the ground with you guys too?” – Mike Weimer

“Al Williams!  I remember a night flight with Al.  We were coming in for a touch n go at Ellsworth and he dropped the nose gear on a black cat right on center line.  Daggitt was foxtrot and had to scrap it off.” – Tom Timmons

“Hahahah I remember that, they put cat killers on the front of your red mission folder.” – Mike Weimer

“Yes…Truitt, Paver, and crew chief had to spend night in hospital.” – Mark Gillett

“I remember nights of many dead jackalopes on the runway too.” – Mike Weimer

“Mark,  I’ll never forget you in the left seat.  Al in the right and you pulled off your name tag and flipped it at Al and the Velcro caught in his tight haircut.  Al’s comment, “Frost, you’re my harassments witness…”  Fun times back then.  Laughing our butts off…” – Cary Johnson

“LeRoy Bollich was on headset when it tot hit.” – Joseph Hoy

“A few hours in that airframe.  I swear you could stand back in compartment 3 and look forward and see the “bend” in it.  Just always felt crooked!” – Robert Dilly

“The story in the early 1980’s was that because of the accident 262 did not fly quite straight, much like a car with a bent frame goes down the road.  262 was referred to as “to sick to” fly.  It seemed there were many bag drags from 262.” – Gale Lee

“My E-115 crew’s names were on it for a while, right before I was transferred to the 28th ARS.” – Daniel Lightning Rogan

“If I remember correctly…Dan you out in left rudder trim and right aileron trim put in during AR.” – Mark Gillett

“Mark, you were a wonder to behold during receiver AR.  I think you taught it in your sleep. LOL ” – Daniel Lightning Rogan

“Good ol 2 sick 2 was twisted when and noticeable during receiver A/R.” – Bryan Anderson

“I have a lot of hours in 262 and never knew about this…Thanks for posting!” – Cary Johnson

Why An Officer On EC-135C Doomsday Planes Packed A Revolver
Contact the author: Tyler@thedrive.com

The Pentagon’s ‘doomsday planes’ are always fascinating topics. These airborne command posts convey the orders that could bring about armageddon and can do so even after parts of the United States become the home of towering mushroom clouds, powerful electromagnetic pulses, intense firestorms, and blinding flashes of light. 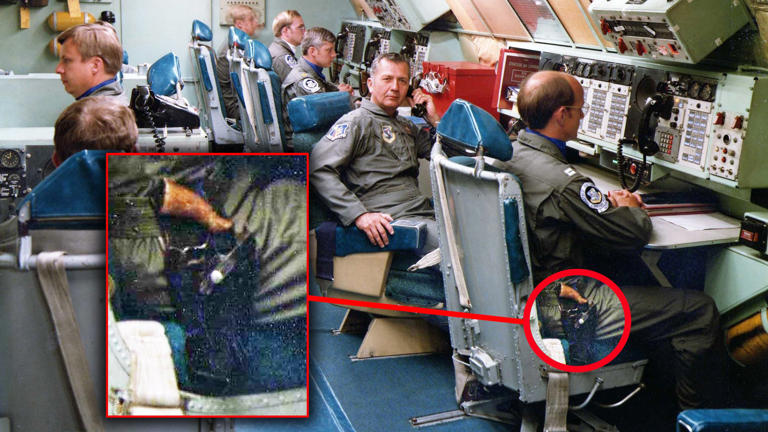 During the Cold War, the U.S. military’s Airborne Launch Control Center (ALCC) mission, dubbed Operation Looking Glass, was of the utmost strategic imperative. If the orders couldn’t be given to launch the country’s intercontinental ballistic missiles (ICBMs), even as a strike on the United States was in progress or had already occurred, the nuclear deterrent becomes, well, far less of a deterrent. The USAF’s fleet of EC-135C ALCC aircraft served to mitigate this weakness, and onboard, at least for some of their existence, was a revolver-packing officer… just in case. 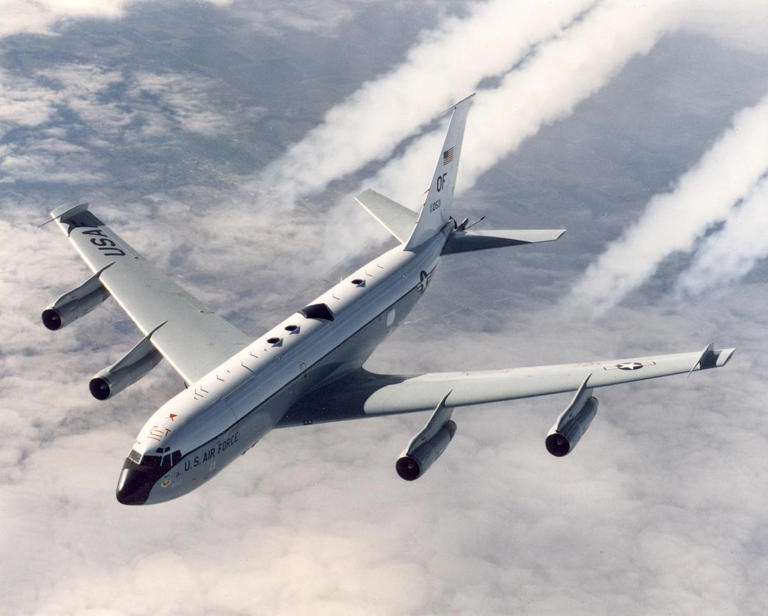 Historic images from within the electromagnetically hardened and highly-missionized cabin of the EC-135C show an officer in the rear right crew position with a sidearm on his hip. Considering this is inside the pressurized cabin of a high-flying C-135 derivative that launched from a highly secure based and filled with other airmen with security clearances, the sidearm seems like a bizarre addition. 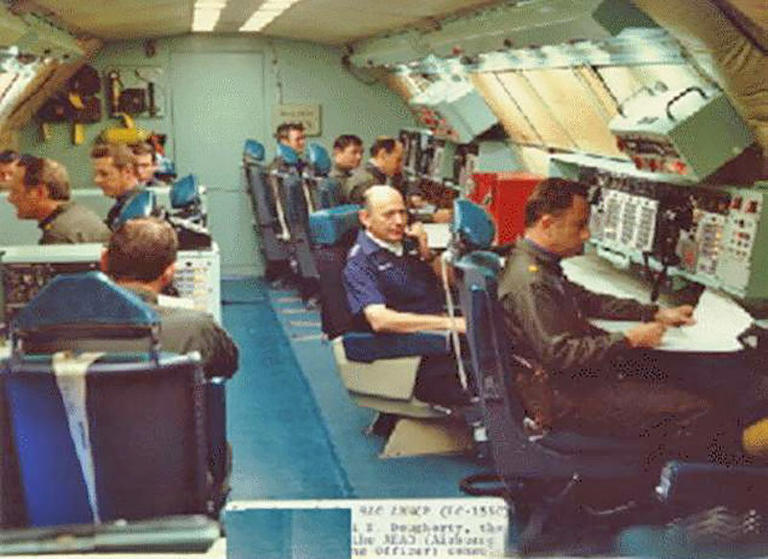 An image showing the revolver-armed officer at their position aboard an EC-135C. USAF

Robert Hopkins, an accomplished C-135 flyer himself and aviation historian who wrote, among other books, the ‘bible’ on the C-135 and its many variants, explains to The War Zone that this was indeed a security measure aboard the EC-135C for a period of time:

“Yes. Comm Officer and Ops Officer were custodians of one key plus all the SIOP material. It changed over time, but the original argument was to protect access to either of these from rogue crew members.

B-47/ICBM crews carried them for a while, too. Also, the Emergency Actions NCO was responsible for collecting SIOP docs from SAC underground, and the Comm Officer had all the codes, so were armed during ground transport of materials to/from aircraft.”

Looking Glass missions first began being flown in 1961, though the more tailored EC-135Cs wouldn’t join the service until a few years later. During the type’s career, one was always airborne, 24 hours a day, up until July of 1990, which is an incredible feat. For the eight years that followed, the EC-135Cs continued to serve, flying regular missions and sitting ground alert, until the type was finally retired in 1998. Its watch was primarily assumed by the Navy’s E-6B Mercury, which combined the Looking Glass mission along with the Navy’s Take Change And Move Out (TACAMO) submarine-launched ballistic missile command and control functions. Still, the EC-135C will always have a special place in pop culture as the original doomsday plane and after, including starring in movies like By Dawn’s Early Light. 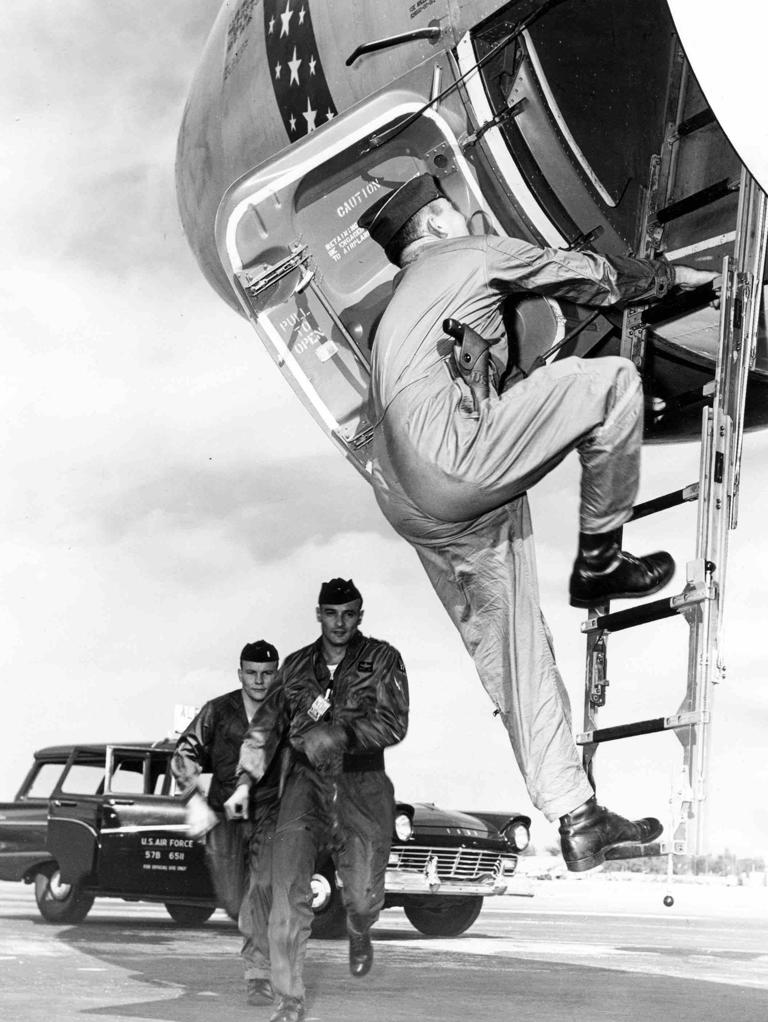 While it may seem like having armed officers aboard such a plane would be something out of a fictional thriller, it was very much a real thing during the heady days of the Cold War.

52 thoughts on “Remember When…”